Dr Gordon signs off after 40 years 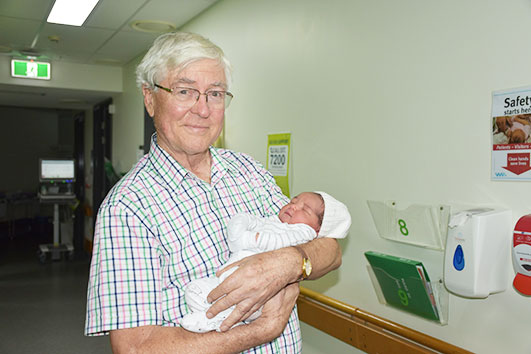 It’s a familiar instruction that has been voiced by nurses, midwives and doctors at Ipswich Hospital over the past four decades whenever they sought counsel from an experienced obstetrician in times of emergency or pregnancy and birthing complications.

The phrase has been uttered for perhaps the last time following Dr Michael Gordon’s retirement from Ipswich Hospital last month after 40 years of continuous service.

He leaves an impressive legacy after delivering an estimated 6000 babies and overseeing the birth of another 50,000 of the region’s most precious people. Dr Gordon has also passed on his knowledge and expertise to his Ipswich Hospital colleagues and many of the state’s leading specialist obstetricians.

“You never get over the joy of delivering anyone’s child,’’ Dr Gordon said.

“Architects take pleasure in the buildings they have built but I take pride in the children I have delivered.

“There are both triumphs and tragedies in our work, I think that is part of being a doctor.

“The close shaves, where we manage to keep mums and babies alive and healthy despite great complications, are the ones that stay with you.

“When you have been involved in a major save and you later see them down at Woolworths it’s nice to know you have had a hand in them leading a normal life.’’

Dr Gordon said it was a privilege to follow the patient’s journey from antenatal consultation through to labour, delivery and sometimes gynaecological surgery.

“Now when I walk down the street in Ipswich I encounter many people whose lives I’ve been involved in.

“I have delivered Ipswich Hospital staff members’ children. There was a baby whose mum and dad I delivered and I’ve also been involved in the delivery of three generations of the one family.”

Dr Gordon first walked the corridors of Ipswich Hospital in 1973 as an obstetric and paediatric registrar before training at the Mater Hospital in Brisbane and for a further three years in England.

After gaining extensive surgical experience in complex cases, including hysterectomies and breeched births, Dr Gordon returned to West Moreton in 1978 to complete 40 years continuous service at Ipswich Hospital. He also worked at St Andrew’s Ipswich Private Hospital until 2015 and was the former Director of Obstetrics and Gynaecology and Chair of Surgery at Ipswich Hospital.

Over four decades Dr Gordon became regarded for his expertise and calm leadership in an emergency, and was the go-to advisor in many complicated pregnancies or birth.

“I prefer to lead by example – I like to train people in the practical rather than the theoretical so a lot of the training or mentoring that I have done is at the coal face rather than a lecture theatre,’’ he said.

He said other advances in technology and paediatric care had also seen a significant improvement in survival chances of babies born prematurely.

He said the antenatal and birthing needs of the region would be in safe hands.

“I hope Ipswich Hospital continues to flourish and develop and I look forward to it becoming a tertiary hospital,” Dr Gordon said.

“I’ve enjoyed a very good partnership with the entire team from registrars, nurses and midwives to paediatricians and ward staff.

“I’ll miss the whole birthing experience and I’ll miss the camaraderie that exists in the hospital between staff.

“I’m not going to miss being called in the middle of the night!”